As parents, guilt is something that we accept as part of the job. It wafts over us from time to time and can often linger like a bad fart. You know the one, when we get consumed by feelings of sadness and regret as we beat ourselves up over our parenting decisions and approaches. It can either give us a kick up the arse, forcing us to step back and assess if something is wrong that we need to change, or it can eat away at us as we question our parental choices and we feel the pressure from what society indicates we should be doing. Or, even worse, the guilt we feel when we fail to live up to our own expectations of perfection.

Guilt is something that is regularly with me. Most often, I can accept it. Having three kids I am constantly feeling guilty for being tired and crabby, stressed that I’m not giving them enough individual time and annoyed that I have only got two arms for cuddles and that sometimes one of them is left out (maybe evolution will take over here and provide the mum of three an extra limb – it could happen, you never know).  It reached its worst point ever over the recent weeks. With the middle child increasing his Pre-School hours with his entitlement to 15 hours free childcare and the eldest having her place at ‘big’ school confirmed. While everyone has been posting quite emotional statements of how sad they are to see their little ones growing up,  getting  more independent and what not, I must admit I have been experiencing a slightly different set of emotions.

I’m not going to lie, but I have actually been looking forward to it for a little while. For me, this is the beginning of a journey that will lead me to a place, quite soon, where I imagine things will start to get a little easier and maybe, just maybe I could start to get some fragment of a life back (when I mean life back I mean being able to read a paper and de-fluff more regularly – the simple things, I’m not asking for much). With the youngest at his Nanny’s one day a week, the reality of a tiny bit of a life was getting closer. Their ever-increasing independence had meant that my life was about to start getting easier.

Then, after a fleeting sense of joy, relief and wonderment (oh the amount I was going to achieve in those 4 hours child-free time and the 11 hours of 1 child responsibility was AMAZING), the GUILT hit me.  Oh and what a complete and utter bitch it  has been, as it turned those momentary emotions into a humongous and long-standing feeling of complete and utter shittiness, where I ultimately concluded that I was the WORST MOTHER IN THE WORLD.

I was feeling ashamed for looking forward to them being off to school and pre-school so that I could be free. Free to go to the loo on my own, free to get on with a couple of jobs safe in the knowledge that world war 3 wasn’t going to erupt in the living room over a small item of plastic crap that no one has played with for six months. Free to browse, peruse or wander around a shop sans double buggy and a bag full of emergency biscuits (quite happy to retain the latter) or simply sitting down and watching a bit of TV and catching up with events in the real world. 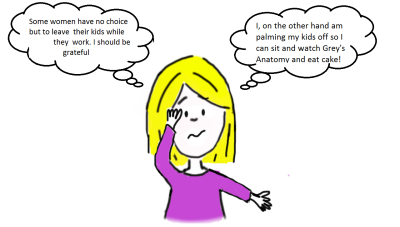 I didn’t expect to feel relieved, I was meant to feel distressed after all, the more free time I had meant I would be spending less time with them. That’s meant to be upsetting, right? I, was glad to have some free time. But the truth, disappointing as is, is that I’ve not enjoyed motherhood as much as I thought I would, I have often felt smothered by it; smothered by motherhood. The house is claustrophobic with kids and dogs at my feet, multiple arses to wipe, dual tantrum calming, triple bedtime hassles and having been multi-tasking on speed for a good while I had begun to run out of steam.  It’s been 4 years and 191 days since I exited the real world to pursue a role of child making and rearing. I’d since created three humans and I’ve been working my ass off ever since. My role, as slave to midget’s, has put me in situations which would bring any employer to their knees in tribunals and my TOIL balance was through the roof. I was ready for a bit of me time.

But three kids in three years was never going to be easy. I knew this. I did this. I don’t need sympathy, this is what I wanted (well, sort of). I knew it was going to be hard but yet I still thought it would all be perfect. I still expected to enjoy EVERY moment. I still had visions of skipping through a meadow, Von-Trap esk, with my happy singing children skipping behind me.  I expected to have a Mary Poppins style sense of fun and order with Annabel Karmel’s cooking abilities. But I didn’t expect there to be so much poo and dis-order. I couldn’t have imagined the whining or the wrecking and spilling. Some days it drove me mad, I was more like Cruella Deville .

In this day in age being a stay at home mum is a privilege. We are the fortunate ones who get to swan around play groups, joining baby massage groups and music time clad in Barbour jackets and Joules tops packing everything into a Yummy Mummy bag and playing child top trumps with each other. Everyday we are meant to feel that this is a fortunate position to be in and while it most definitely is, it doesn’t make it any less difficult and quite frankly a little boring at times.

Yes, I am sad to see them move on and frightened that this is the start of a journey to a place where they won’t need me anymore. I will miss a lot of things about them being babies, but our days up the park or being able to stay in our pj’s till dinner time, curling up in front of a Disney film and picnic’s on the living room floor – will still happen, just on different days. Things are moving on, they’re not over and they’ll be even more amazing times to come but a good lot of crappyiness will come along with it.

So here’s to the next phase, the wonderful world of Biff, Chip and Kipper and school runs *Sigh*.

So, this little blog of mine has been shortlisted for a BiBs 2016 Fresh Voice Award and if by any chance it lightens up your day and makes you smile instead of cry then pop over to Brit Mums to vote or you can click on the badge below. I’m up for Fresh Voice and its the first category on the list – EASY PEASY

If you love blogs, check out some greats…
(Just click on the badges below)

5 thoughts on “The Mother of all Guilt”