Illness struck the other week. One by one we fell to a dreaded sickness  bug. It hit us, quite literally, at the crapiest of times – like in the middle of the night. For most of the ‘ill’ week  we found ourselves with a sick child sandwiched between us in bed. With one hand on a sick bowl, we spent most of the night poised ready to take a blow. There was very little sleep had, so as you can imagine the mood of the house was not at its best.

When illness strikes, as a parent, you get on and deal with it – you have to. It’s not the time to get all soft and be a big girls blouse about the  puke and shit because the little people are looking to you for comfort and reassurance that everything will be ok. You ‘mum up’ and hold your breath, while you remove chunks from Captain America’s face and reassure a sad little girl that it doesn’t matter that she’s puked all over her new Disney princess duvet. There’s an instinct in us that clicks into action and just gets on with shit. Like spending most of the night soothing a wrenching child, showering down a chunder filled duvet cover and cleaning the shit smeared toilet seat . You are the one they run to for comfort and Calpol. You are the one that deals with stuff for them and helps them to get better. It’s a an empowering place to be – being  their protector and carer and the one who is strong for them when they are at their lowest. You read stories to comfort them, you fetch them water, you snuggle them up on the settee and you basically do anything you can to get them through and make them comfortable, regardless of the cost to you.  You drink a ridiculous amount of coffee (way more than you usually do) to get you through the day and then you get yourself in bed early because you need to be strong for them. You are ready to do whatever needs to be done, no questions, anything to get them well again, because it’s just bloody awful seeing your little ones suffer.

But then, the bug gets you. You thought it might happen, but you hoped it wouldn’t as you’ve scrubbed your hands raw, but it knocks you for six. All of a sudden you find yourself looking after sick children in between clearing up your own puke. You find yourself in a difficult position, where the ‘mothering’ side of you wants to take care of your little ones but the ill side of you just wants them all to fuck right off so you can curl up in a ball on the settee and feel proper sorry for yourself.

I’ve done the hangover before. Its tough but somehow you manage it – there are pills you can take and there’s certain foods (e.g emergency McDonald’s trip) you can eat to remedy the situation (sometimes even getting pissed again..hurah), but when you can’t get off the toilet or keep anything down, mothering or ‘mumming up’ become near enough impossible. Being a mum in charge of small humans and being ill is a struggle. Its relentless.

Being ‘mum ill’ is a bitch for various reasons  …….

– No one will allow you to wallow in your own self-pity. You can’t forget the world exists because to the kids, you are their world. They’re totally dependable on you and they can’t suddenly make their own breakfast or do something simple, like find their own pants. Unfortunately they’re still your kids and they’re still there being all useless at getting shit done for themselves.

– You  can’t stay in bed all day or  plant yourself on the settee watching crap on TV, because the kids will still want feeding (inconsiderate shits). If you’re lucky you might get to sit on the settee and watch a few episodes of Paw Patrol until one child gets bored and twats the other on the head with the TV remote and all hell breaks loose. That’s about as far as the taking it easy goes when you’re ‘mum ill’. 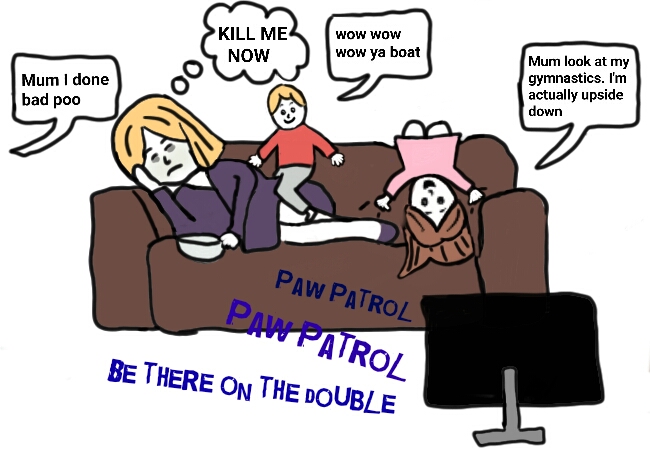 – There’s no ringing in sick like you used to be able to do at work. Before kids you could just opt out for a day with just one quick phone call and your best sick voice. Like totally opt out, as in someone else would pick up your work for you. Opting out these days means not cleaning up, eating stuff that doesn’t involve any preparation (usually just a simple ripping of the packet and pouring contents into a bowl kind of prep) and putting the kids in front of the TV all day. They’re still there shouting their demands at you and with this job there’s no sodding absence line to call. There’s no opting out for the day unless out can get your kids sorted and by the time you’ve organised someone to take them off your hands, someone to pick them up from school, got your other half to sort stuff out so he can be home early – congratulations you bagged yourself an hour of peace until they all come back! Life was definitely easier when it was just a couple of spreadsheets that needed babysitting.

– No one will give you a minute. If the kids need a drink or anything at all then there’s no chance of being patient until mummy has finished puking, they’ll want a drink and they’ll want it NOW. Your kids are not like work colleagues; they were lovely. If they have a question they’ll send you an email and apologise profusely for bothering you when you are ill. They won’t expect you to respond straight away they’ll be patient. They won’t follow you round all day whining at you until they get what they want.

– Your mum is not there to offer YOU sympathy or care, she’s roped into entertaining the kids while you’re ill. As far as being looked after yourself – you’re on your own, no-one will snuggle you up in a blanket, because they’re all dealing with the little people. Anyway, there are no clean blankets for you because they’re still being washed from when the rest of the house puked on them. You will have to settle for your cheesy smelling dressing gown that you couldn’t dry properly because you can’t get the washing done properly.

You get the chance to feel sorry for yourself for all of about an hour, that’s it. You take the mothering down a gear and just let shit go. There’s no let up. There’s no break from being a mum you just have to accept that you’re gonna be crap at it for a day or two until your back up and running.

You have just mum up and crack on.