Parenting experts have confirmed a link between parenting patience and instances of shoutiness and profanities during the summer holidays. Whilst many of you may be rolling your eyes and muttering ‘no s**t’, many will be encouraged that this officially makes them, well, normal and slightly less crap than they first thought.

The research, which used a sample of parents over the summer holidays, concluded that there is a negative relationship between levels of patience and instances of ‘ffs’ being spoken at a higher than normal under-the-breath volume. Dr Shirley, who conducted the research identified, ‘there are certain environmental factors that contribute to these parents losing their s**t. Patience is negatively impacted by the constant whining, bickering and demands for snacks. Coupled with the inability to keep on top of household chores and a decline in self-care, these parents are frazzled by the end of week 6’. Dr Shirley and her team were able to identify the factors where sanity started to slip and yelling became more prevalent.

Jane from Rugby, who appeared to be prepared, ‘I was organised, I had a plan of fun stuff, then the weather forced me to change my plan and I didn’t realise how expensive everything is. I never recovered.’

As many of us struggle to come to terms with our shouty moments and beat ourselves up repeatedly over losing our sh*t and finding entertaining them so bloody difficult, Dr Shirley states that ‘these results cannot be any clearer; the pressure to entertain, crap British weather, budget restraints, balancing work and childcare, staying at home and the reduction of self-care…. it is almost impossible to avoid losing a few marbles’. 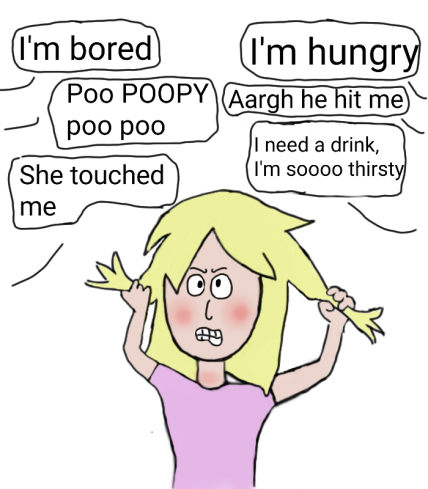 Linda, a mother of three from Leicester, plagued by guilt stated, ‘when they’re all together they just act like knobs and start playing stupid games like replacing a word of a song for the word ‘poo’. I don’t know anyone who can keep their cool while they sing a long to the Trolls soundtrack and every other word is POO! I couldn’t cope, I just lost it’.

Surely Dr Shirley we’re all not potty mouthed screamers? ‘ No, the research identifies a higher rate, of shouty profanities. However we were unable to confirm circumstances where they didn’t occur and we are unsure as to whether the patient, calmly spoken parent exists, or, if in fact they are even human’.

There you have it. If you have used f**k, shouted or threw a plastic weapon in the rubbish bin, research confirms you are normal.

If you see any parent who seems to be calm, smiling, with their balls in the air, please contact Dr Shirley as her next phase of research is to see how the f*&$@*g hell they do it.

10 thoughts on “It’s Impossible NOT To Lose A Few Marbles During The Summer Holidays – Research Confirms.”