When I became pregnant with my third I never could have imagined the attention it would bring my way until I became noticeably pregnant. Some of the looks I was given were priceless; this is an illustration below of how it would go, 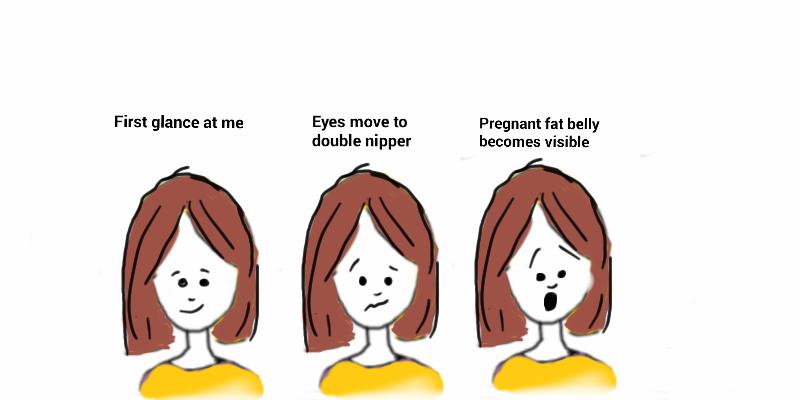 So for me, who was already under the impression that having three kids under three was going to be a challenge, I became horrified at people’s reaction. Self doubt entered the head and I began to question our ability to cope. What are we doing? People think we’re stupid? Am I going to go mental and lose a child in Asda? What I really needed was a little bit of encouragement, but to be fair to all, I don’t think anyone wanted to bull s*#t me into thinking it was going to be easy.

After George arrived there came a time when we eventually managed to get ourselves out of the house, fully dressed and Weetabix free. Getting out and about with three kids in tow is not an easy task at the best of times, well one kid is hard enough. It takes a lot of planning to fit all errands into the small window of time that you are allocated until either a)someone is hungry b)someone pisses their pants or c)someone enters the over-tired zone and turns into an evil gremlin. There is no time for browsing or perusing you simply have a list, which is small and necessity based, you do not defer from the list and you get in and get out as quickly as you can. Long gone are the days of ‘nipping in’ or ‘whizzing round’ the shops, its full on, physically and mentally draining. So with this in mind, a list and a small window of opportunity, in addition to the horrified looks, there is also another obstacle that I now regularly find myself coming up against – being stopped for a chat. I would like to consider myself a social person, who is happy to converse with anybody about what ever they wish but when you have ran out of bribery snacks in a shop and you are pushing the meltdown boundary, it starts to get a little tense. Especially when you are consistently being asked a few borderline personal questions and are the butt of their hilarious jokes. So I developed the Threesypeasy FAQ’s; 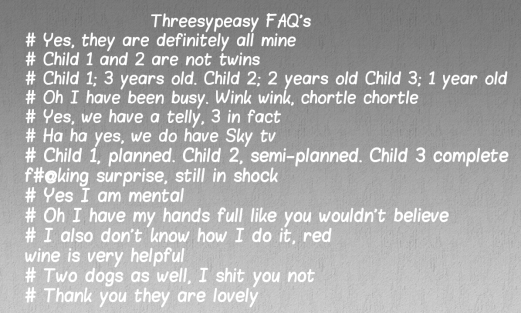 At one point I did consider making this into a sandwich board and wearing when I was out, but that would have been silly because the people that stop for a chat really do mean well. No offense to you all but these days I tend to avoid shopping with the kids, not because I don’t want to have a chat, my god I love adult conversation, but simply because shopping with three kids is hideous. I now have a lovely man from Asda who brings it to my door step.